The growing downtown Buffalo Niagara Medical Campus (BNMC) has increasingly become a focal point for the city’s development. Despite this medical resource, members of our Buffalo community continue to confront significant health and wellness challenges.

In the fall of 2018, Charmaine Wheatley met with individuals from innovative organizations in and around the Medical Campus. These initiatives address a variety of inter-related issues: homelessness and mental health; neighborhood and race-related health disparities; patient relationships and perspectives on the healthcare system as well as issues of diagnosis-related stigma and access.

Through one-on-one sittings, a collective portrait of the communities brings into visual conversation individuals working in the BNMC’s Innovation Labs, UB medical students and facilitators involved with the Health in the Neighborhood course, residents of Buffalo’s East Side neighborhoods, individuals experiencing homelessness and members of the Restoration Society, Inc. team who are dedicated to providing them with vital support services. These portraits present a vision that is consistent with the belief that the health of our city relies on a person-centered approach to care and an understanding of the lived contexts that contribute to health and wellness.

The Future of Health in the City has been an expansion of Wheatley’s artist residency at the University of Rochester’s Medical Center. In this project, as well as in her work in Rochester, Wheatley helps bring visibility to the work being done to envision a new future for the city. Her work highlights the value of portraiture as a vehicle for humanizing and thereby building compassionate connections across communities.

A research-based biopharmaceutical company focused on the discovery, development, and commercialization of innovative medicines.

The Emmy-nominated documentary “Don’t Define Me”, focuses on Wheatley’s work with people affected by HIV in Western New York. Gilead Sciences, Inc. invited her to California in 2019, to create portraits of members of their community after seeing the film.

One person who sat with Wheatley is Alan Wang, former San Francisco ABC7 anchor, and patient-ambassador for the San Francisco Hep B Free campaign.  In his portrait, Wang speaks about his experiences with Hepatitis B, which has taken the lives of three of his Uncles. He refers to the virus as "the silent killer", that is "largely affecting Asian people” - and that infects almost a million Americans, including a disproportionately large number of Chinese Americans.

Another person who sat with Wheatley is Chrissie Chew, a Senior Medical Scientist at Gilead, who is researching a cure for rheumatoid arthritis.  Her work is personal, since her mother was recently diagnosed with it; her grandmother also lived with the disease and she herself experiences pain in her joints.

On July 1, 2017 the University of Rochester Medical Center’s artist in residence, Charmaine Wheatley shifted creative attention to the vibrant HIV community in Rochester and Buffalo, NY. She believes de-stigmatizing happens through humanizing. As a result, each of these portraits are born out of an open hearted discussion with people affected by HIV. Sitters include those from the University of Rochester, Trillium Health, Evergreen, and Equal Grounds.

Hope Gardens is a community center located in Bushwick (Brooklyn), New York. In 2016 Wheatley did an artist in residence with Hope Gardens members through the Brooklyn Arts Council. She did one-on-one sittings with individuals, doing portraits from life over casual conversation as well, she taught the basics for members to do their own self portraits. Artistic practice was the structure or pretense making meaningful connections possible. 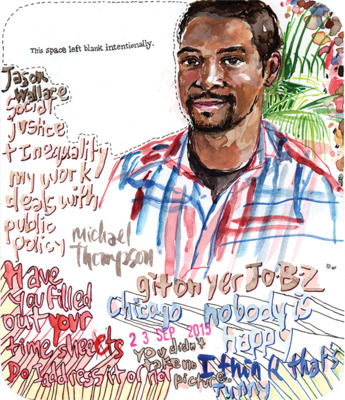 The Krakus Senior Center is a Polish community center located in Greenpoint (Brooklyn), New York. In 2016 Wheatley did an artist in residence with Krakus members through the Brooklyn Arts Council. She did one-on-one sittings with individuals, doing portraits from life over casual conversation as well, she taught the basics for members to do their own self portraits. Close friendships were formed.

From January 1, 2017 - June 30, 2017, Wheatley began her artist in residency at the University of Rochester Medical Center in New York to the local mental health community. People living with mental illness are frequently marginalized and discriminated against. Those who live with a diagnosis as equally those who are professionally engaged in bettering the lives of those who she worked with individuals from a variety of organisations: Strong Ties, Strong Recovery, Creative Wellness Organization, St. Joseph’s. Watercolor portrait paintings that include words her individuals shared during their sitting.

These portraits were created with the goal of reducing the stigma surrounding opioid use disorder.

The stigma associated with opioid addiction can cause people to feel isolated and hopeless. Many of these sitters know exactly how long they haven’t used and they work hard to stay that way, showing others that recovery is possible.

Not everyone affected by opioid addiction is able to turn their lives around. For those who died from opioid overdose, recovery is no longer possible.

These people were not less resilient or weaker in some way. Nor were they any less deserving of a second chance. They were human beings, who deserved love and acceptance – just like any of us. 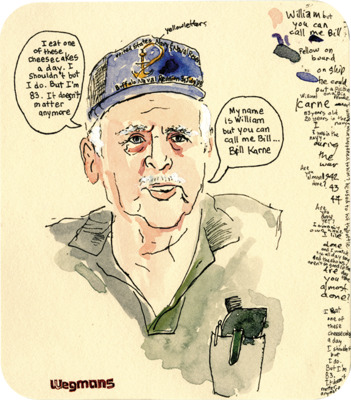 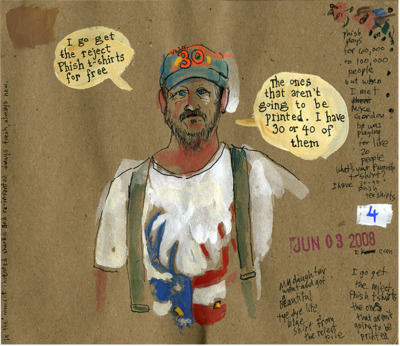 Charmaine Wheatley was an artist in residence at the Seven Below Initiative in Vermont during the summer of 2008. A program made possible by Phish guitarist, Trey Anastasio and the Burlington City Arts. She got acquainted with local seniors, doing their portraits from life. Each portrait is approx. 4 x 6 inches.